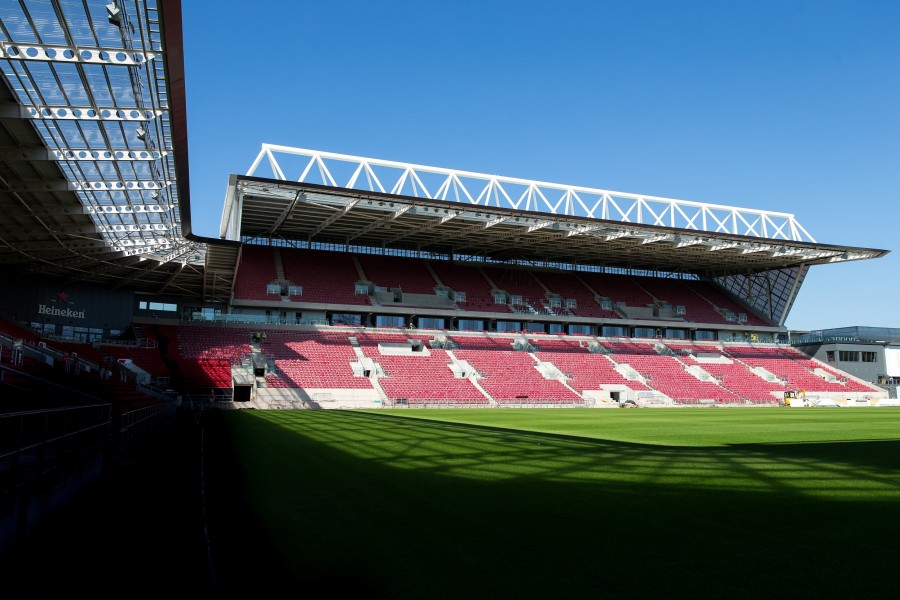 This article was first published at PanStadia & Arena Management Magazine on August 4, 2016

The GB£45m build has transformed Bristol City FC and Bristol Rugby’s home ground into a state-of-the-art, 27,000-seater venue, perfectly timed for the rugby club’s return to the top flight of the Aviva Rugby Premiership.

A complex build to an incredibly tight timescale was a tough challenge, as Bristol Sport Chairman, Martin Griffiths – the man who masterminded the project – explained:

Yes, it has been an extremely complex project, especially having two codes playing at the same time and both having amazing seasons. To see the new double-tiered West Stand opened in August (just in time for the football season) was a huge achievement for everyone involved.

The decision to rebuild Ashton Gate was based on the clubs achieving long term financial sustainability. This stadium should ensure that, as it will become a focal place in the South West, not just for sport but for business too.

Sustainability is a key theme. Unsurprisingly for a city which was ‘European Green Capital’ last year, businesses have embraced ‘going green’ and Ashton Gate is no exception. Sitting in pride of place on the roof of the new West Stand sits a raft of solar panels.

The 117kW Solar PV system, consisting of 460 solar panels, is expected to generate 95,090kWh per year. The equivalent to powering 23 average energy-use homes for a whole year. Due to the stadium’s size, all of the electricity generated is expected to be used on site and, along with a biofuel boiler, have been designed to reduce the stadium’s carbon emissions by 20%.

It’s been very reassuring to attract some extremely large national and international events in our first year of operation. This year promises to be even bigger with the West Stand coming online.

Bristol has historically struggled to host large events with company’s going elsewhere, like Birmingham and Cardiff. The fact that we now have a thousand-seater restaurant, 18 corporate boxes along with the Directors Box and Players’ Lounge all available for private hire, means that we can not only cater for the largescale events but also the more intimate, smaller company events, that traditionally have been hosted by local hotels.

The stadium design has taken significant influence from the hospitality industry, with Griffiths having huge experience in the hotel sector. The look and feel of the popular coffee shop echoes the hotel-feel. With no sports branding in sight, it very much feels like one of the buzzing coffee shops of nearby Clifton. Next to it, is the Sports Bar & Grill, which opened last October in time for the Rugby World Cup. The bar, which boasts the largest indoor pub screen in the country, has already cemented itself as the place to watch the big sporting moments in the city. Thousands packed into the stadium to watch England compete at the EURO ‘16 championships in June and take advantage of the big screen and huge fan zone in the South Stand concourse. One of the key parts of the design was to provide a horseshoe-shaped concourse that fans and delegates could walk through to connect with each other in three of the four stands.

Whilst embracing the ‘green’ theme, the stadium designers have firmly kept an eye on new technologies. In partnership with Zeetta Networks, a spin-out company from the University of Bristol, an Open Networking solution for heterogeneous networks based on Software Defined Networking (SDN) has been developed. Using Ashton Gate as a ‘live lab’ to test the cutting-edge High Density Wi-Fi, both are achieving a world ‘first’ for sporting stadia.

All that remains now, is for the fans to fill the new Ashton Gate stadium!

Zeetta shortlisted in the Tussell Tech200

Zeetta has been shortlisted in the Tussell Tech200 as one of the fastest-growing technology companies in the UK public sector.